Food is so many things. It is nourishment. It is connection with others, with the earth, with our bodies. And food is childhood. Deep in the learning curve of this blogging endeavor, my brain is all widgets and gadgets and html and links these days (when I’m not obsessing over how to best photograph an artichoke).  And it occurred to me there was this strange link between certain foods and childhood memories. You think of a food, and click, you’re back in your mother’s kitchen, with its smells, its feel. Not just a cerebral memory, a very visceral one. Well, when I see white asparagus, click, my brain goes right back to Sunday lunches at my mother’s apartment. The spring. The cool weather. The radishes. The cream sauce.

Marcel Proust wrote a vastly more eloquent version of this idea in In Search of Lost Time, in the famous Madeleine scene, where taking a bite out of the little French cakes brings him back to his childhood:

“[…] When from a long-distant past nothing subsists, after the people are dead, after the things are broken and scattered, taste and smell alone, more fragile but more enduring, more unsubstantial, more persistent, more faithful, remain poised a long time, like souls, remembering, waiting, hoping, amid the ruins of all the rest; and bear unflinchingly, in the tiny and almost impalpable drop of their essence, the vast structure of recollection.”

(I found this translated quote here, where you will also find a more extended version of the scene)

I just love the idea that taste and smell are “souls”… I suppose my goal is to be creating lots of originating links in Pablo’s brain when cooking for him, imprinting tastes and smells he will click back to, later in life. A way to leave a mark as a parent, strangely.

So Proust had Madeleines, and I have (among other things) asparagus. White asparagus, to be precise. Yes, I know. They make your pee smell weird. But their flavor and texture are so unique (and so different from their green cousin). My mother prepared them lukewarm, in a creamy sauce. With fresh tarragon. 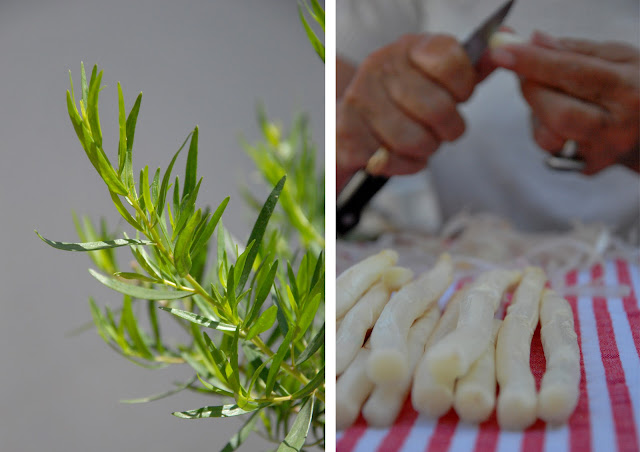 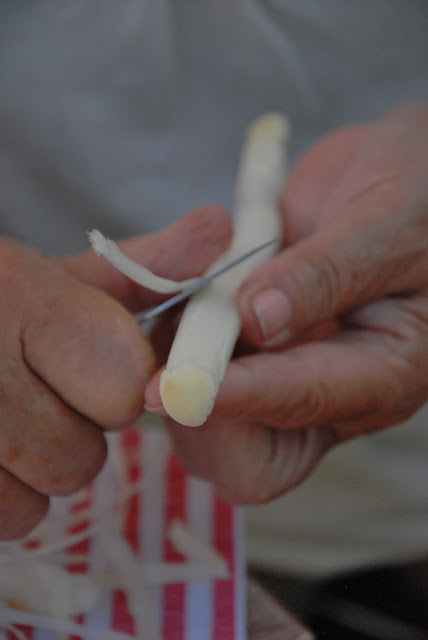 I have adapted my mother’s recipe for Pablo (and us as well), to make it on the healthier side, using sheep’s milk yogurt instead of cream.

It makes a great finger food (a bit messy with the creamy sauce… but messy is the word of the hour… or year). And it is a wonderful opportunity to familiarize baby with the flavor of tarragon. I cannot think of a happier (tastier) place for tarragon to be!

The contrast between the warm asparagus and cold cream sauce is something interesting and new for baby, and the texture of white asparagus is very unique as well. It’s healthy, tasty and pretty to look at… Nourishment and sensory experience, two for the price of one! 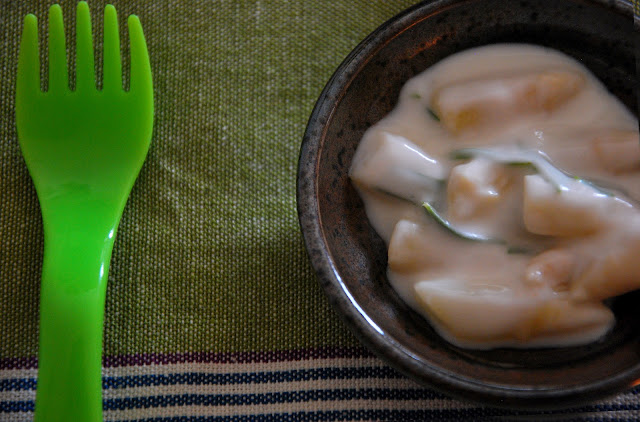 Age: I offered asparagus tips (white or green) as a puree, boiled and mixed with potato around 6 months. As a finger food, I offered them plain (boiled, not steamed, so they’re less bitter) around 8 months, and with the yogurt sauce around 9-10 months.

A bunch of white asparagus

A pinch of salt

Peel the asparagus: Cut off the foot of the stem, and with a small knife, remove the shiny film covering the bottom two thirds of the asparagus (not going all the way to the tip, see picture above.)

Put the asparagus in boiling water for about 12-14 minutes. Use a knife to make sure they’re done, when they’re very soft.

Deposit the asparagus on a paper towel to absorb the moisture. Let cool to lukewarm.

(Or reheat if you want to refrigerate and eat later).

Yogurt sauce: Mix the sheep’s milk yogurt, lemon and salt (adjust quantities to taste, though go very easy on the salt for baby). Cut up the leaves of tarragon with scissors, to make their fragrance and flavor come out, and stir into the creamy sauce.

Cut the very tips of the warm asparagus for baby (they’re less stringy, keep the rest for the grown-ups!) and pour some of the creamy sauce over them.