The other night, at dinner time with Grandpa and Grandma,
Pablo was served some pork chop with mushrooms. He happily grabbed his fork in
one hand, and with the other hand, picked a mushroom from his plate. He
examined it, and turned to me: “La mer?”
Loosely translated as: “Does this thing I’m about to put in my mouth come from
the sea?” We then had a conversation about the forest, the place where you can
find bunnies, deer, trees, creeks. And mushrooms.

I felt very happy about this exchange, because I realized
that Pablo is interested in where his
food comes from. He knows it’s not just magically there. Not only does he
know a process of shopping, and cooking went into it (which he participates in
more and more), but he also knows the food grew, or lived, somewhere. And I
have, without giving it much thought, just as part of our conversations at the
dinner table during our family meals, pointed out to him where the things he
eats do come from. Shrimp, fish, oysters from the sea. Herbs from the garden.
Apricots and peaches from our market friend Sam’s trees. Cherries we picked
ourselves. Eggs laid by chickens. I am very matter-of-fact about naming the
meat we eat as well, whether it’s duck, chicken, lamb, etc.

Way before our children ask us where babies come from, they should ask us where their food comes from. Or at least, let’s hope they do. And let us have a good answer for them (one that does not include an unpronounceable ingredient, as Michael Pollan advises). If we want our children to eat and enjoy real, nutritious, clean foods and give them a lifelong love for them, we must 1/ have, 2/ nurture, an interest in those foods, a curiosity of the what (it is, it tastes like, smells like, feels like, looks like), the how (it was grown, made, prepared, cooked), and the where (it comes from.)
This pursuit of connection with our food, this love and
interest for the sources of our food, has been so fulfilling, nourishing, as it were. And it led us a
few weeks ago, to Mariposa Creamery Farm Stay, in .

Gloria and Steve, who both have day jobs while running this goat and farming community, welcomed us in their haven for a couple of
wonderful days. By wonderful, I mean the type of vacation that makes you wonder
whether that should be your full time life. Because then, every morning would be
a little bit like this… 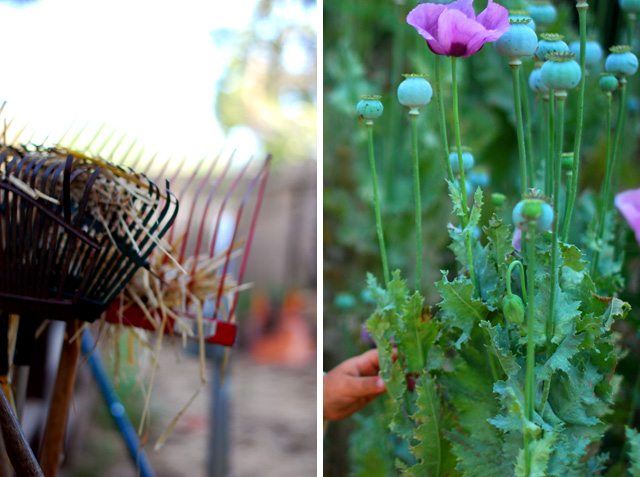 We wake up early and step outside within a few minutes of
waking. We hear the birds, and the goats in the distance. Haphazardly dressed,
Pablo refuses to put shoes on and wants to go explore the vegetable garden. It
exudes free growth. It’s not a perfectly trimmed garden with ranks and beds.
It’s a freestyle vegetable jungle. Pablo explores, passed the tall fennel,
chards, amaranth, squash flowers, around the artichokes and the shiso. 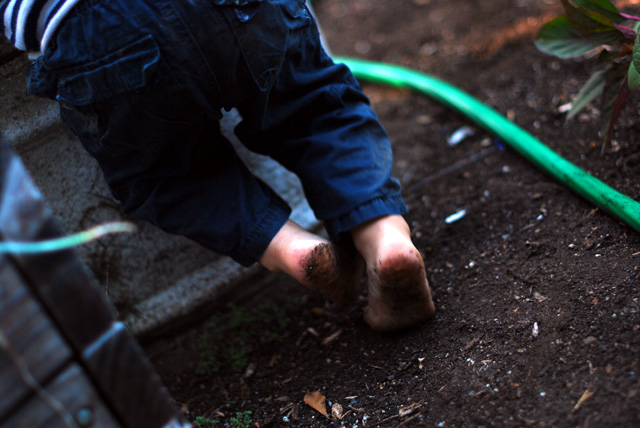 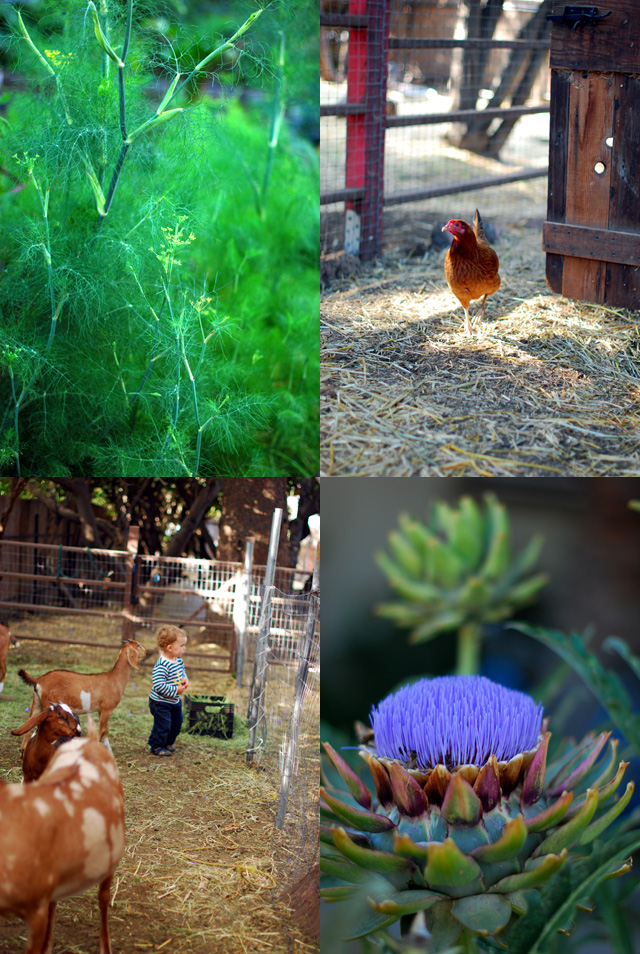 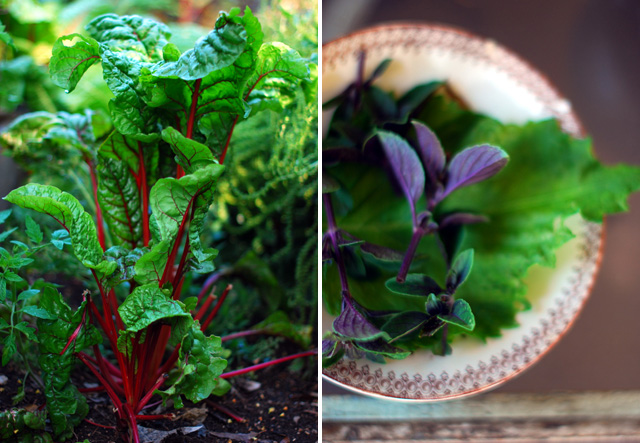 I try to
follow but his small size gives him the advantage, to explore and find
treasures. And a treasure he does find. “Tomate”.
There, hidden in the depths of this jungle he’s so simply made his own, hangs
a small, perfectly vermilion tomato. He extends his little hand and gently
picks it. We both take a bite.

He continues on, feeling the earth on his feet. Steve greets
us as he picks some chards for our breakfast. The goats bleat over there, on
the other side of the big house where many people of all trades seem to evolve
productively.  We walk over there. Pablo
stops by the berry bush to pick a blackberry, and we meet the carpenter, whose
shop is next to the creamery. He shows us how he spreads the seeds of the wild
flowers around every so often. So they keep growing wild throughout the
property, and they do. Bright orange and yellow blotches everywhere, which a certain goat
might be allowed to exit the enclosure to enjoy, every once in a while… 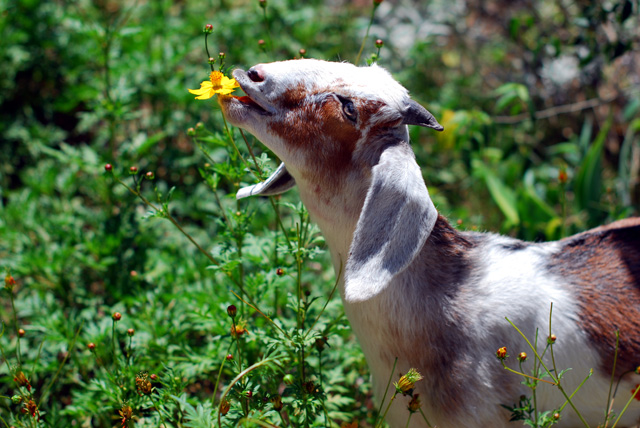 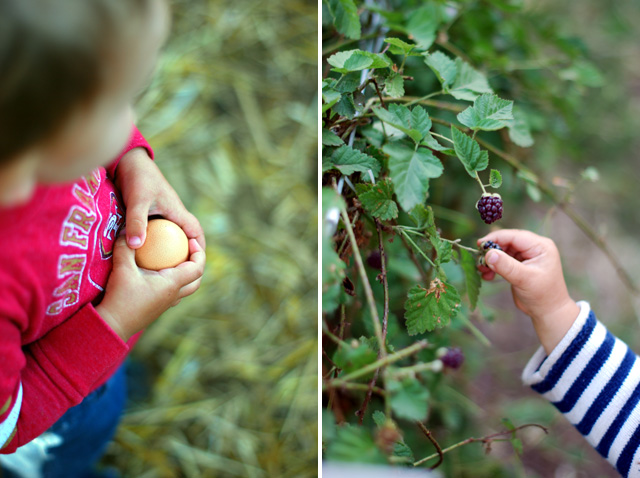 We wonder into the chicken enclosure, and find Gloria grabbing
some fresh eggs for breakfast. Pablo is eager to hold one. Pablo is eager to
hold two. One gets broken, so he holds on to the other one carefully. Lesson
learned.

Now for another lesson, a goat milking lesson. The
suggestion that I may milk the goat straight into my coffee enchants me. I
follow suit.

Pablo is familiar with the milking movement, as it is also
the sign for milk in sign language, which we used when he was an infant. This
was always his favorite sign 😉 But he is a little intimidated by Brin, the
goat we are getting our milking lesson with. 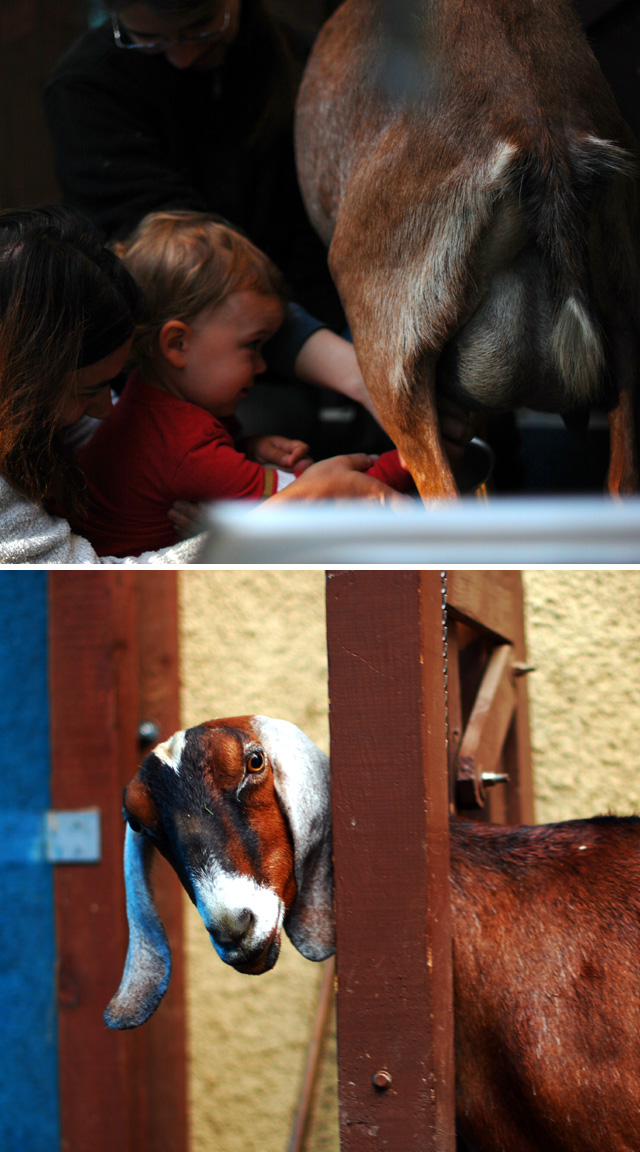 He decides it is wiser to feed her
treats while we learn. He watches baby goat Spike get some milk from Brin.

The fresh
milk tastes exactly that. Fresh. It is not gamy as I expected, though I like
gamy. It tastes very mild and delicious. Oh the wonderful things that can be
made with that milk. And Gloria and Steve do make so many of those wonderful
things here. They teach a cheese making course I am hoping to take some day.
And yogurt.

We hang with the goats for a while, the 5 months old one are
just about Pablo’s height. They are terribly photogenic. Dare I say hams even? 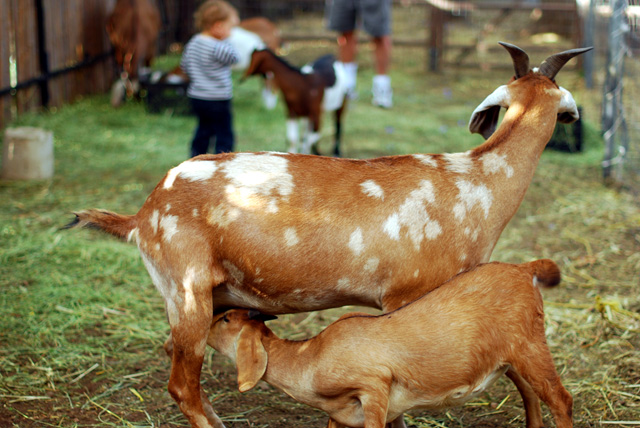 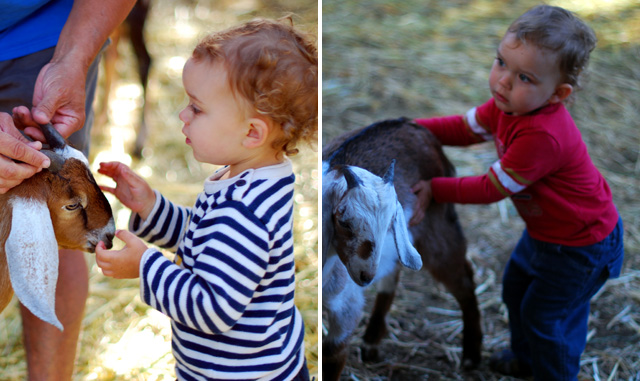 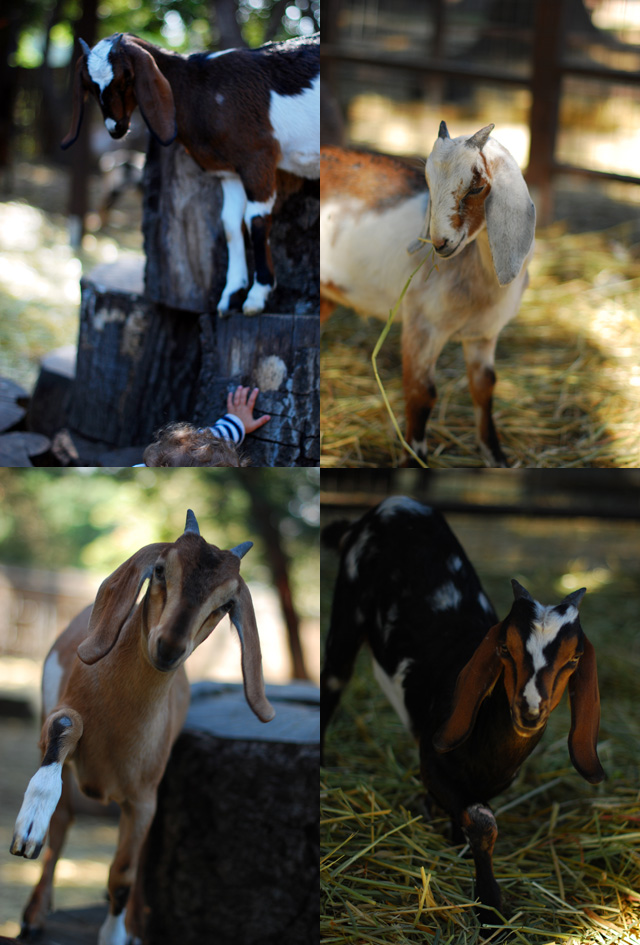 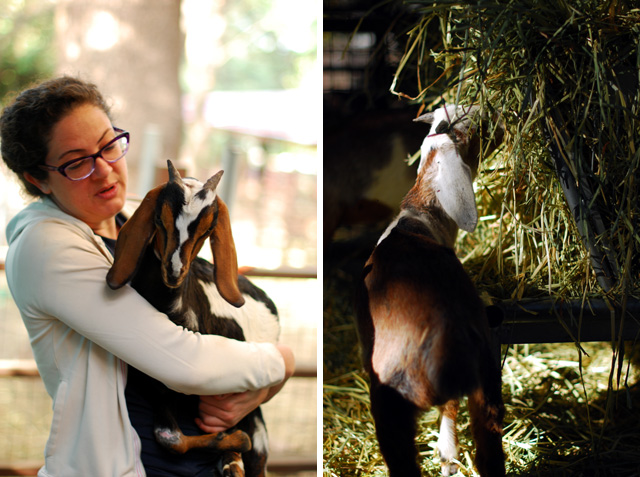 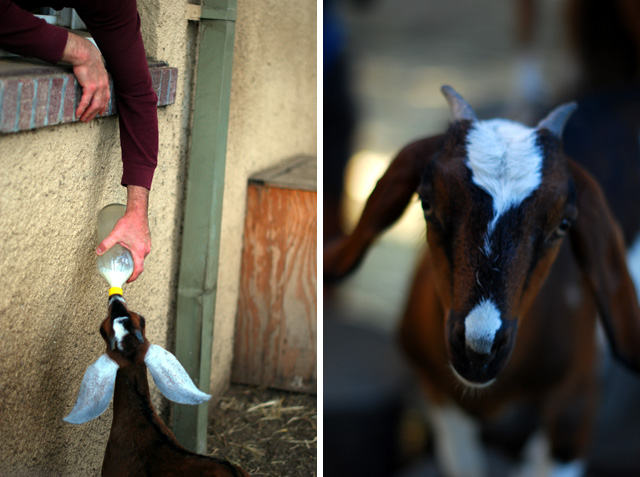 We get this sense of family. The goats, Biscuit, Apple,
Ice Cream, Rhubarb among others, are raised with love and warmth. It radiates. 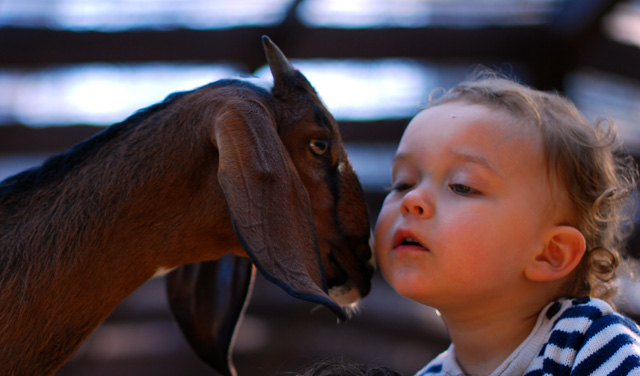 It’s breakfast time. What a feast Gloria has made for
us. One of our most memorable breakfasts ever. Fresh squeezed orange juice from
that tree, right behind us. Homemade bread, with fresh chèvre. Homemade jam,
homemade ketchup. Roasted potatoes, fresh herbs. Artisan sausage from a friend
of theirs. Pablo discovers a love for sausage. And eggs of course. Sauteed
chards with homemade goat feta. Goat milk yogurt. Brand new apricots deposited
by a neighbor in the mailbox last night, packed in an egg crate. Juicy as can
be. 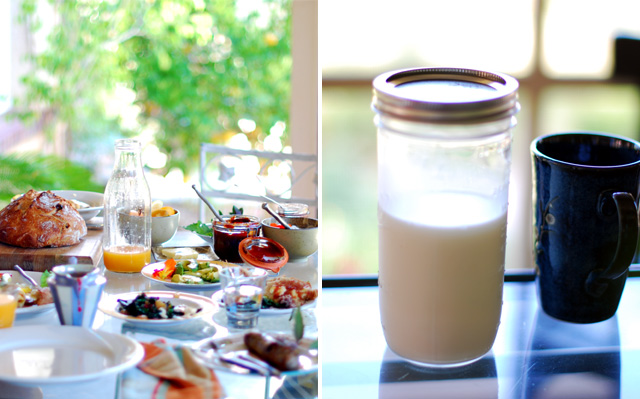 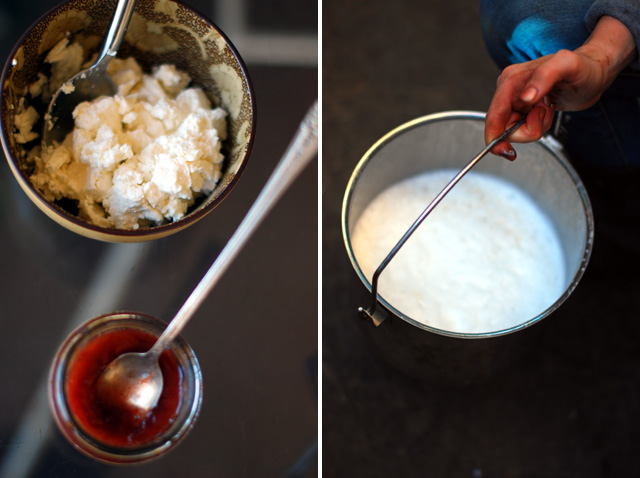 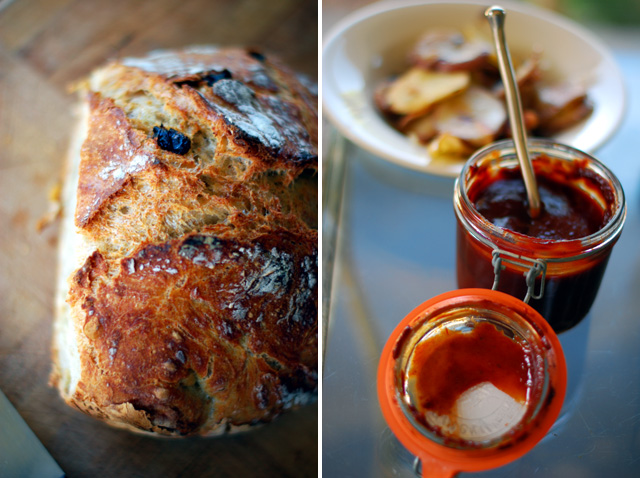 This is how people lived hundreds of years ago. This is how
some people live today, right here in a suburb of . And how wonderful, brave and
beautiful.

After breakfast, Pablo wanders on the path in the back of the house, among
the wild poppies, fruit trees and artichoke plants, holding a piece of cheese
in his hand, mumbling to himself “squeeze, squeeze”, the goat milk the cheese
came from.

I love that he can experience this freedom here. This rich environment. 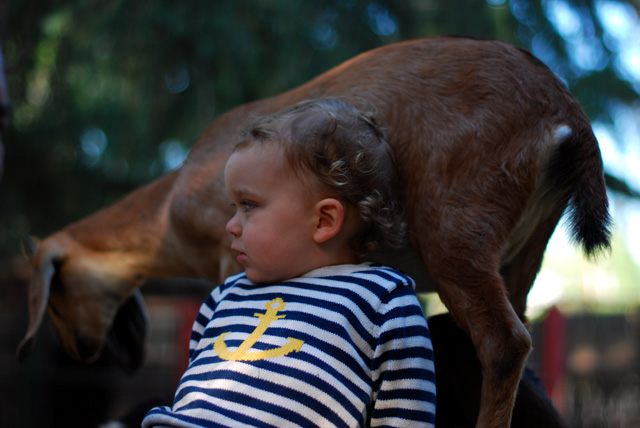 Certainly our morning is a very romanticized version of farm
life, which is tremendous hard work and commitment. But what a worthwhile
venture.

It sometimes feels like the kind of life that I want, for myself, for Pablo. At
the same time, I have no idea how we could get there, or how it would fit with
the other stuff our life is currently made of. Sometimes we must make choices.
As long as we don’t live by default. Food for thought, for now. 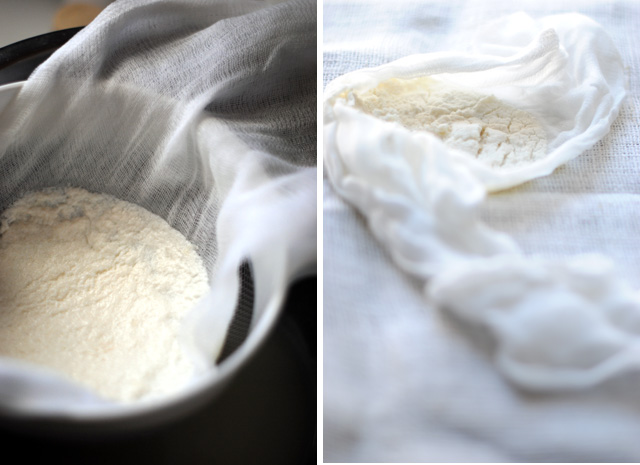 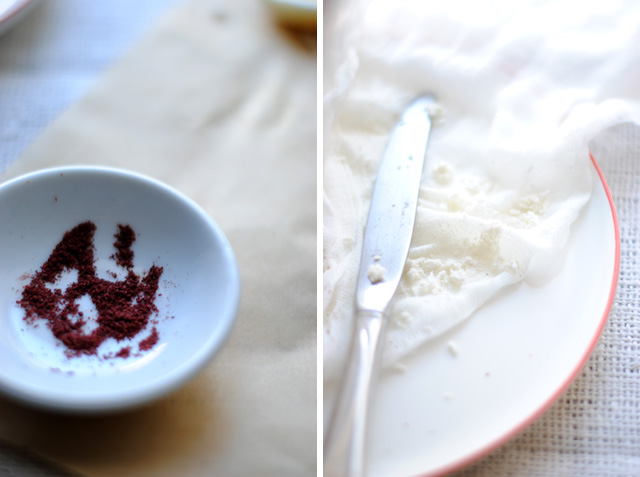 Inspired by our memorable breakfast at Mariposa and Gloria’s
homemade cheese, and until I can take her cheese making class and talk to you
about making homemade Camembert (!), I thought I’d try my hand at simple goat
cheese ricotta for this tartine. I found numerous recipes online, but I found
some details to be critical for success (after a couple of failed attempts), so
sharing how I went about it here. 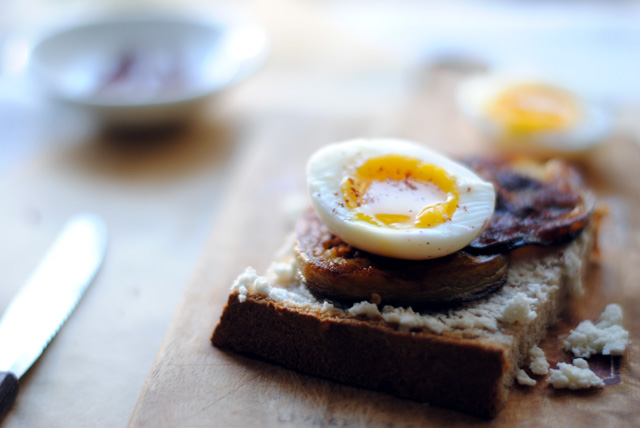 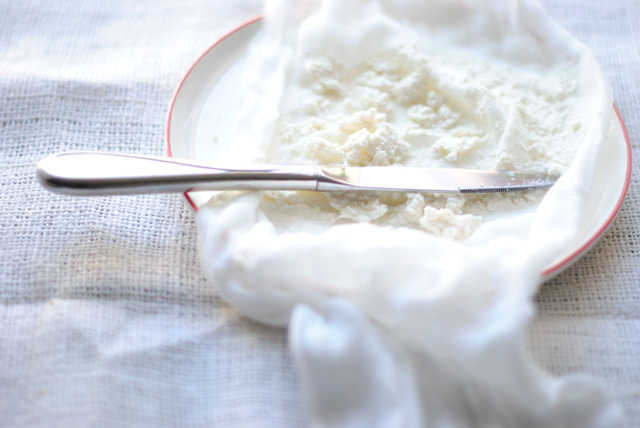 I heard of the happy marriage of eggplant and sumac
powder, a Mediterranean spice that’s lemony and slightly on the sour side, on The Splendid Table recently, I wanted to give it a try. It is
confirmed, Lynne Rossetto Kasper is never wrong when it comes to good food. 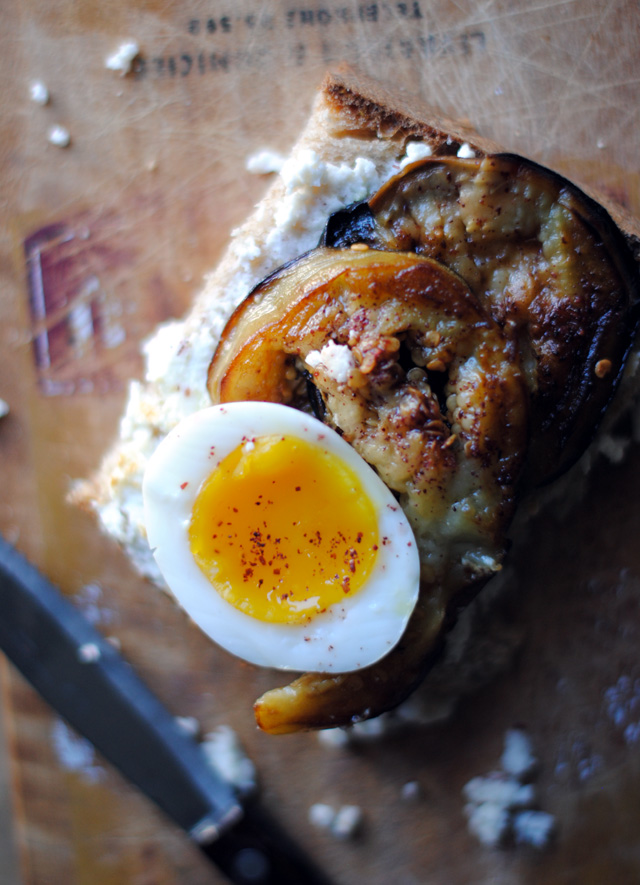 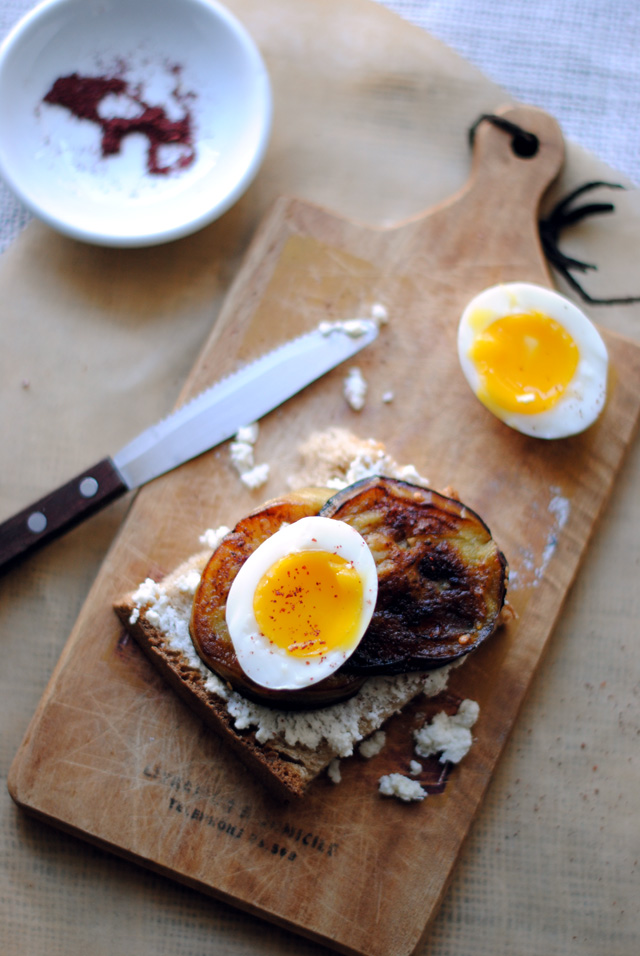 Before moving on to the recipes, if you want more info about Mariposa Creamery, check out their website, awesome airstream farmstay, and their Facebook page, for a daily goat cuteness fix.

Age for babies: 8-10 months for the ricotta and sauteed eggplant (break up the tartine in small pieces for a great finger food). 6-8 months for the egg yolk, 10-12 mo for the white.

1/4 cup homemade goat ricotta (see recipe below)
2 slices of bread, homemade if possible (this one is awesome)
1 egg (room temperature, if fridge cold, plunge them in hot tap water for a minute or so)
2 tbsp coconut oil
1 tbsp olive oil
1 small eggplant
A few pinches of sumac
Salt & pepper

For the ricotta (this yields about 1/3 cup)

Pour the milk in a non reactive pan (glass, non-stick, or stainless steel) and stir in the salt. Heat on low, stirring every once in a while so the  bottom doesn’t burn, until the milk just begins to boil (or reaches 180-190° on instant read thermometer, better to have it a little hotter than a little cooler, I found).

While the milk heats, line a colander with cheesecloth (4 layers worked for me), and place the colander over a large bowl.

When the milk has come to a light boil, remove from heat, and add the vinegar. Stir gently a couple of times, and let it sit undisturbed for about 5 minutes. The curds should form fairly quickly.

Check with a spoon that you have curds, and gently pour into the cheesecloth-lined colander to drain.

After 20 mn, you will have a creamier/wetter ricotta, great for spreading. After 1 hr or more, you’ll have a firmer, more crumbly ricotta.

For the soft egg


I used this exact method found on Cannelle & Vanille, and it is foolproof.

Fill a small pan with enough water to cover the egg, bring to a boil over high heat. When the water starts boiling, swirl a spoon in it. Gently drop in the room temperature egg with a spoon, and swirl it around in the water for a few seconds, so the yolk stays in the center.

Cook for five minutes. Prepare a bowl with ice water.

Remove the egg from the boiling water and transfer to the ice bowl for a minute or two.

Then carefully peel the egg, and gently slice in two. The white should be cooked, but the yolk soft.

Putting the tartine together


Peel and slice the eggplant. Drizzle or spray the slices with a little olive oil.  In a frying pan, melt the coconut oil, and sauté the eggplant on medium high for a few minutes. When the slices start to get brown on one side, flip them, add salt & pepper, lower to medium and cover. Let cook for about 10 minutes, until the eggplant is very soft.

Toast your bread slices to taste.

Spread a generous amount of ricotta. Add a few slices of eggplant. Sprinkle with sumac, and add half an egg on top.

Enjoy with a side salad, for example.