This first cookie recipe is perfect to use in place of a birthday cake, or any other special occasion that usually calls for a cake. It is delicious and can be decorated any way you want. For a larger group, the recipe can be doubled or tripled according to how many servings you need. 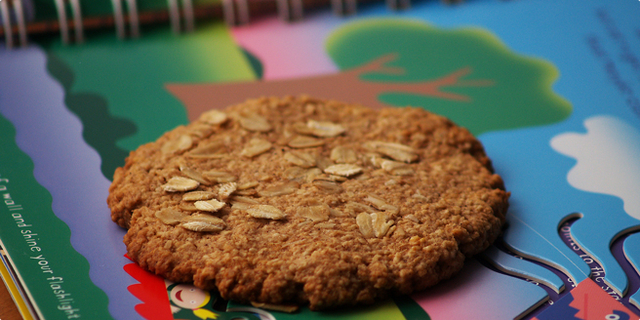 It is Secret Recipe Club reveal again and I have been assigned to It’s Good to be the Cook. It took me a while to settle on a recipe. I had seen more than one interesting ideas. Topping the list there were the wasabi marinated salmon  and the cauliflower pizza crust, but then I saw these pancakes and I just had to try them.

First of all Beth raves about them. Then I checked the list of ingredient and it contained 3 ingredients I had to use or throw out by the end of this week: egg whites, oatmeal and cottage cheese. And last but not least I had never made pancakes before, crepes yes, but pancakes never.

So I set out and prepared them for Sunday breakfast. And they were delicious! They were not spongy at all and they were super quick to make. I used instant oats because that is what I had at hand, but I suspect they would taste better with the regular oats because then you can flavor it to taste rather than having it taste how the manufacturer decided to try it.

Oh and I also have to announce the winner of the giveaway. And the winner is …. Manda! Congrats!