Our childhoods are made of joy (hopefully), sorrows, regrets, losses, traumas small (and sometimes big). They’re also made of unsuspected blessings we didn’t have the tools (or wisdom, or distance) to appreciate at the time. As an adult and especially as a parent, I have found myself sorting through these childhood experiences, processing, understanding, accepting what needed to be processed, understood or accepted (a lot of that goes on while I chop, fry or whisk). A sort of spring cleaning, decluttering of the soul, if you will.

Like real food, for example. A trendy topic if there ever was one. Real food was just regular food when I grew up. Processed foods were minimal, artisan products were the norm. Going to the market, eating seasonal fresh fruit and vegetables, as well as meats and fish (a lot of meats and fish are seasonal in France, scallops for example can only be fished between October to May), from small local producers… all that was just the way it was. There was no other alternative, really. Only now do I realize what a blessing it  was.

Or things like a sense of community. It wasn’t as explicit as that. We lived in a small town, walked most places, knew the baker, butcher and fishmonger enough to have a chat with them and know their kids’ names. I never really saw the benefits of all that then.

Now that I am a mom in Los Angeles, whose toddler is being offered junky popcorn from CVS in art class, it’s a whole different ball game. But there’s a lot to be said about creating these things we value for ourselves deliberately. 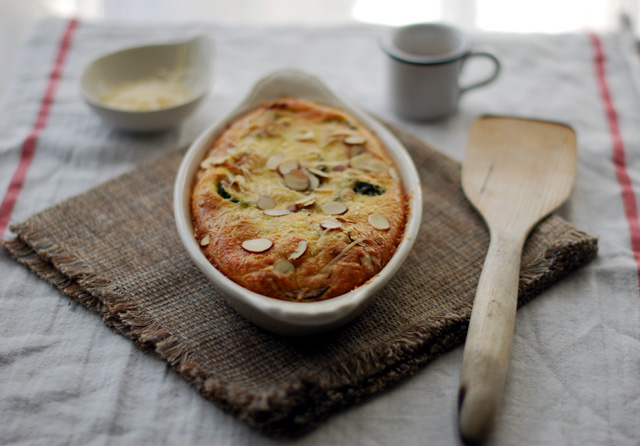 This week, my husband, my son and I went to our little neighborhood farmer’s market. It’s close enough for us to walk to, through a residential neighborhood, where I noticed the purple jacaranda trees blooming and raining purple onto the streets. It reminded me that the first anniversary of this blog is coming up in a couple of weeks. I can remember taking a picture of the purple leaves and talking about the farmer’s market in one of my first posts. My life follows the rhythm of the seasons again. There’s some calm serenity to that, in stark contrast with an anxious-ridden sand-through-fingers sense of time passing.

As soon as we arrive at the market, we notice a buzz, a hustle bustle we haven’t felt in a few months. The trepidation of the warmer season. We always stop by our friend Sam’s organic fruit stand first. Sam is kindness incarnate. He always takes time to cut up a piece of fruit for Pablo. He has a soft spot in his heart for Pablo. And it’s mutual. Pablo looks forward to going to see Sam at the farmers’ market.

So there, at Sam’s stand, is where I start to get very excited (and proceed to flood Instagram with shots of produce!). Stone fruits are here. Tender delicate apricots, white nectarines so sweet they make the apricots taste bland. Cherries.

We stay there longer than we need to, just to baste in the warmth of the moment. Pablo munches on a nectarine, the juice dripping from his chin, peeks at the cherries. People pass by and smile.

Then we’re off to our favorite tomato and vegetable stand. The first tomatoes grown outdoors are here. And fava beans, and zucchini. It’s held by a family farm, a couple and their two grown sons. They throw in a couple of free tomatoes and fresh basil. Last time, they handed Pablo a bunch of carrots he proudly held and walked with.

Pablo has become almost famous there. He feels at home. He makes his stops. Grabs an ice cube or two (or three) from the fish guy. Stares down one of the produce stands for samples. Grabs an olive from the Greek vendor.

On our way out, we notice a new stand. A bakery held by an Armenian family. They laugh as they see Pablo run with abandon and hop like a bunny.  We chat and they tell us they mill their own wheat with a handcrafted stone mill they brought back from Switzerland. I can’t wait to go visit their bakery. The bread is beautiful, artisanal. New friends.

Then it’s getting late, it’s bath time and soon dinner time, and we’ve gotten everything we need. But we don’t want to leave quite yet. This half hour spent there, is a half hour of happiness. And real food. And community. We don’t take it for granted for a minute. Well, Pablo takes it for granted, as he should. To him, that’s the norm. He’ll appreciate it some day. In 20 or 30 years. But right now, it is contributing to who he is inside, and who he will become.

And as we walk home, I feel a moment of pride. Of contentment. I am able to provide this environment for my son, here and now. That’s my job. Providing him with the right environment, and then trust him to thrive in it. Or to struggle in it, as he inevitably must. But an environment where he feels safe, loved, trusted, with a sense of community, and real food.

This morning, we ate the boysenberries we got at Sam’s stand, and they seemed even tastier with the image of Sam’s smile in our minds. Last night for dessert, Pablo and I shared some plain yogurt and an apricot, two spoons in one bowl. His little chubby hand grabbed the apricot half, he looked at it, then looked at me and said, smiling, “Sam!” before biting into it wholeheartedly. 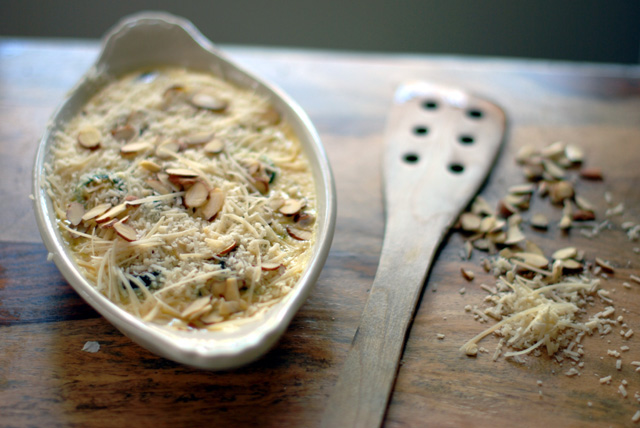 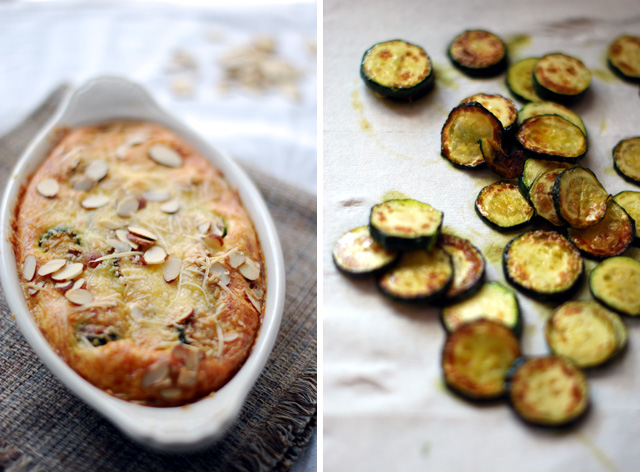 So among the exciting new produce of the season, we came across some zucchini, which we love, as simply as just cold, boiled with mint vinaigrette, or in a terrine, or in a ratatouille.

I was overdue to share a gratin with you here. Gratins are a family favorite for vegetables. This one was scrumptious, and I hope you enjoy it too. 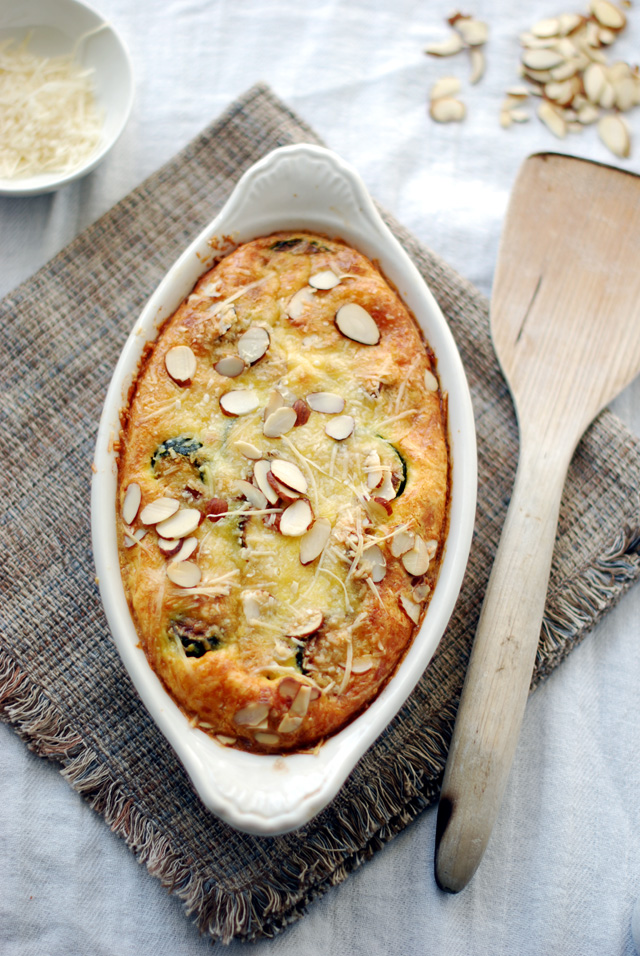 Age for babies: 10-12 months, in bite size pieces as finger food can work well (avoiding the sliced almonds, which would be hard to gum down)

Wash and slice the zucchinis (no need to peel them). Melt 1 tbsp coconut oil and 1 tbsp of olive oil in two large frying pans  (each) (or do several batches with one pan). Place the slices of zucchini in the pans and fry until just golden, about 2 minutes on each side. (By the time you’re done flipping over the slices in one pan, it’s time to do it with the other pan). Add a pinch of salt and pepper, and place on absorbent paper or cloth to let cool a bit.

In a medium bowl, whisk together the cream, eggs and yolk. Add nutmeg, salt & pepper, a third of the Parmesan, and the almond meal.

Bake for about 30 minutes, until golden.

Serve it warm, as an entree with a butter lettuce in an almond oil vinaigrette, or as a side dish with a roasted chicken, for example.