Steering away from my philosophical ramblings a bit here… onto parenting ramblings! As Pablo is hitting that challenging age of the “terrible twos”, which actually are known to start around 18 months, I wanted to give a little recap on where he’s at with his “education of taste” so far.

Generally speaking, he’s at the stage where we hear a whole lot of “non” (French style of course!) throughout the day, there’s a lot of testing of boundaries, of button-pushing, a lot of curiosity about how far a power struggle can really go… A fascinating process really, especially if you look at it like a scientist making chemistry experiments. That seems to be the way Pablo looks at it, intrigued at what he can do, what he can get away with, what power he can have over others (annoying them, making them upset, or happy, etc.) That being said, that power can be scary to a toddler, so that’s when those reassuring boundaries come in.

A recent challenge was when Pablo discovered one of his many superpowers: taking off his bib in the middle of the meal. I had originally established a rule that we must wear a bib and sit in the high chair to eat. When he discovered I was annoyed when he was taking off his bib, he started doing it repeatedly, very early in the meal, and would push me into a power struggle. I fell in that trap a couple of times, and then realized the error of my way. A power struggle was making the situation worse, AND it was ruining my meal (a sacrilege to the French!) as I would get upset. And he wouldn’t eat anymore anyway. So I thought, OK, just go with a simple, calm consequence. So the next time he took off his bib mid-meal, I said nonchalantly, “Ok, you are done with eating? Fine by me.” (If he’s hungry, he’ll eat better at the next meal…) And I let him leave the table, while we continued to eat our meal. The first couple of times I did this, he was pretty surprised, and hung out near us, trying to get our attention. After about 4 times, he stopped taking of his bib during the meal. Now, at the end of the meal, he points to it saying “maman” with his sweet voice and signing “please”, to ask if he can take off his bib, I ask him if he’s finished eating, and if he’s not, we go on with the meal. If he is, so be it. Let me tell you I was relieved this worked! I guess both Pablo and I learned a valuable lesson on that one…

The really good thing here though, is that Pablo remains an excellent eater, happily eating lots of different vegetables (and other foods) at every meal. He has not focalized his testing and resistance to boundaries over the actual food he eats. And I do think that is, at least in part, because of the “toolbox” of strategies I’ve followed since day one of solid foods (around 4 1/2 months), and some of the positive food associations I have tried to nurture. So I wanted to share some of those strategies here, in case someone might find them useful… In no particular order:

Introducing as many different kinds of foods, vegetables, herbs and spices from the very start. By 18 months, there were very few things Pablo hadn’t already eaten. Also trying new foods has become a habit for him, nothing unusual about it (we still try new dishes on a regular basis). I always make sure he tries, and I make tasting something new playful and fun, by being silly with it, telling him it will tickle his mouth (and his curiosity, and hopefully his fancy!). The point is to make it an exciting fun experience.

2. No assumptions, keep the faith

When he seems to reject a food (spitting it out), I remain nonchalant about it, and reoffer it several times over the following weeks, confident that he will most likely enjoy it eventually. There’s nothing so far he has consistently rejected. I have noticed many times it’s not that he doesn’t like the food, but rather that he feels like eating something else on his plate. And sometimes he will chew a food, and then spit it out, which tells me he probably likes the taste, but is unfamiliar with the texture. (This happened with endive salad, he used to chew and spit. But instead of concluding he didn’t like it, I kept giving him a few pieces when we would eat them, and he now swallows the whole thing. Took him a while to become familiar and comfortable with the texture.)

I have made a big effort to avoid any emotional association to food, except that it’s a pleasurable sharing experience. I try not to offer him food to comfort him, or reward him in any way. Also we try to never imply that he should eat to please us (if we did, what happens the day he specifically wants to displease us?), hence the no “one more for mommy” rule. Trying to remember that young children are in tune with their body and what it needs, if we let them listen to their body – which also led to…

Letting him decide when he’s had enough (and letting him feed himself as much as possible). I offer a variety, he chooses how much he wants to eat, as I always feel confident that he can make up for a lighter meal at the next meal. I found he really enjoys having a couple of different things on his plate, and pick one, then another, discerning the difference. Probably helps build a positive association between food and a feeling of independence and self-confidence, too.

We do eat together as a family 95% of the time, and we all eat the same thing (following the French four-course meal format). Eating is a time of togetherness, another positive association.

6. Food for the senses

Keeping eating, cooking, and food in general, playful, introducing fun rituals, letting him touch food with his hands and explore it in a sensory way (taste, smell, touch, even hear: the crunch of an endive or the pschh of chicken browning in olive oil). Within reason of course.

So… Pablo’s “non” have not (perhaps yet?) landed on the food. We shall see how things evolve, Pablo may very well start refusing to eat anything but pickles, or noodles, at 2 or 3. We’ll cross that bridge when we come to it, though I am committed to stand by my strategies above to get me through it. 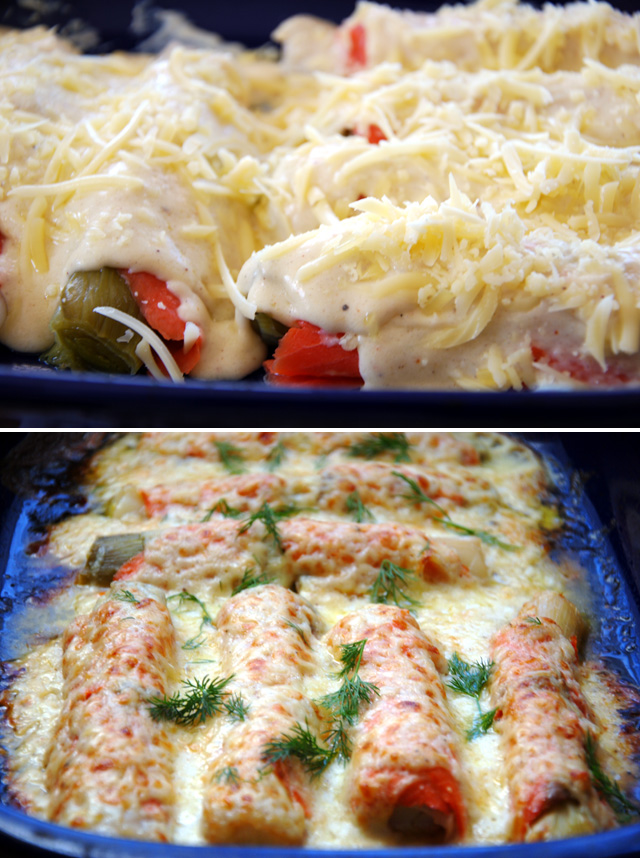 Now, one of the new dishes we tried recently, is this recipe found in a French cooking magazine grabbed while waiting in line at a French supermarket last September.  The cover intrigued me, “Our best recipes, for less than 1 Euro per person”. It turned out to be a great resource for delicious, easy and affordable family recipes. I blogged about their savory herb custard a few weeks ago. These salmon-wrapped leeks were really delicious and an original variation on the classic baked endives and ham.

I hope you get a chance to try it, and in the meantime, I’d love to hear your thoughts, anecdotes and your own strategies to help your children eat well… 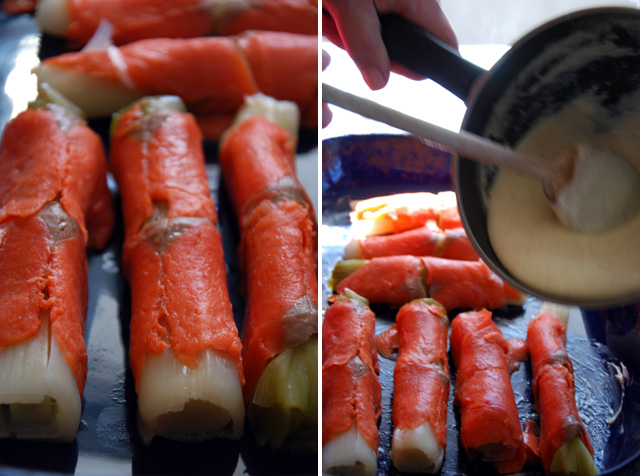 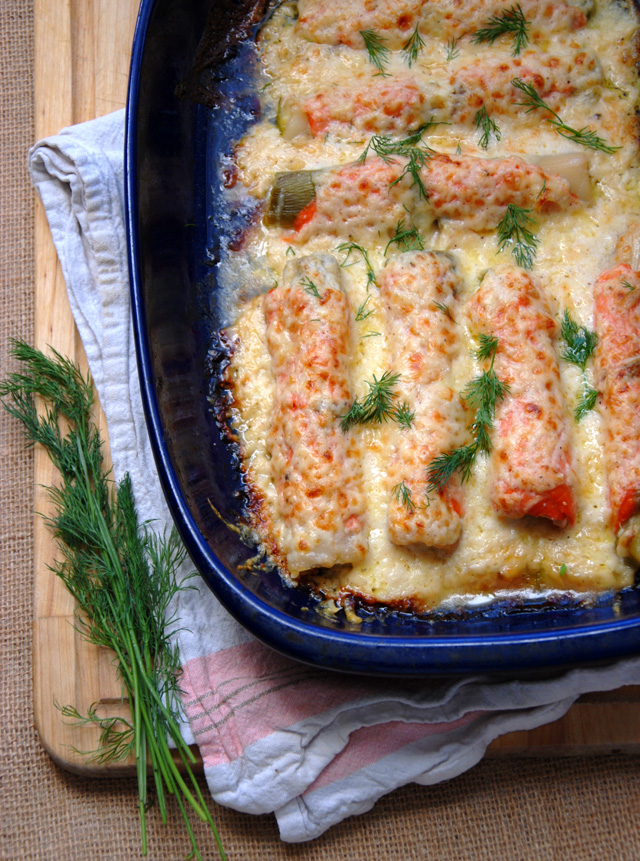 Adapted from Best Of Gourmand Magazine

Wash the leeks, and cut the green part, leaving only the whites. Make an incision lengthwise to wash them while keeping their shape. Steam for about 20 minutes.

Meanwhile, make the béchamel: In a small saucepan, melt the butter over low heat. Add the flour and stir to obtain a “roux” (brown mixture). Pour the cold milk, then the heavy cream and bring to avoid, stirring constantly until the sauce thickens. Add salt, pepper and nutmeg.

Preheat the oven at 400°F. Wrap each leek in a slice of smoked salmon.

Place the salmon wrapped leeks in a buttered baking dish. Pour the béchamel sauce over them.

Sprinkle with the Swiss cheese, and bake for about 15 minutes.

Wash the dill, remove the stem. Sprinkle over the gratin when it comes out of the oven. Serve hot.