Yes, I know, we are in the heart of summer and even though I read everywhere about stone fruit recipes and ice creams and salads, I dare post a recipe for soup. I am compelled to do so for no other reason than the fact that I recently found some nice sunchokes at my local market. And sunchokes simply beg to be creamed into a scrumptious velouté (fancy word for creamy soup). I found this out when savoring (and then making at home) an unforgettable truffle sunchoke velouté on a truffle-centric trip to Dordogne a few Februaries ago.

I have a thing for roots (more on roots here)… and this one has a very unusual, delicate flavor, similar to that of an artichoke; and for good reason, it is also called Jerusalem Artichoke. In France, it is one of what they call the “légumes oubliés”, the forgotten vegetables… Who new rutabaga, parsnips and kohlrabi could be so poetic? They’re often winter root vegetables used a lot for watery soups during World War II. For this reason, my mother has a very unhappy association with a lot of those vegetables, one that takes her back to times of poverty and struggle. Perhaps this is the case for a lot of people of her generation, which may be why those vegetables became “forgotten”. It could also be because they do not lend themselves to mass production and distribution. They’re difficult to cultivate on a large scale, take longer to cook or prepare. So in our society of immediate gratification, those veggies were left behind. Today, more and more people want more variety in vegetables, new flavors, and the forgotten veggies are making a comeback! 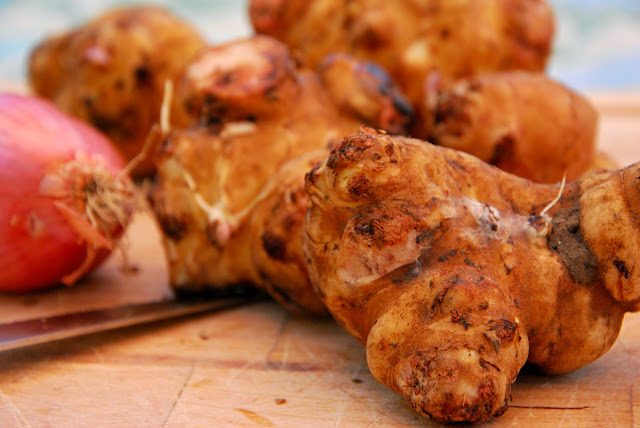 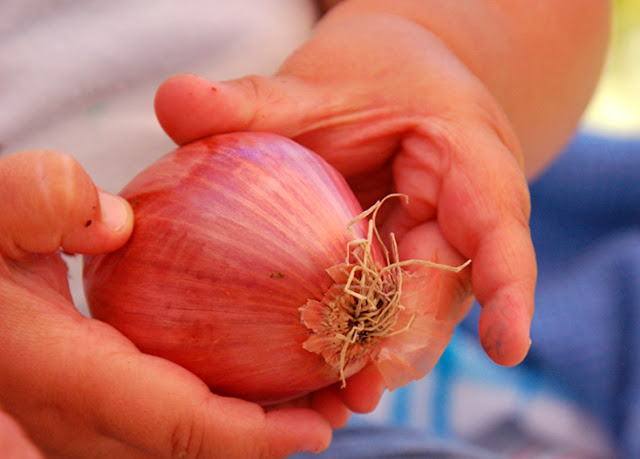 I had never made sunchokes for Pablo before last week, he was very unfamiliar with the taste, and only took a couple of spoons of the soup. It’s a matter of trying again and again (remember, offer something at least 15 times before you rule that your child doesn’t like it!) The grown-ups loved it so much they were quite happy to eat what Pablo didn’t… It is amazing to me that this beast of a root can turn into such a beauty of a soup! 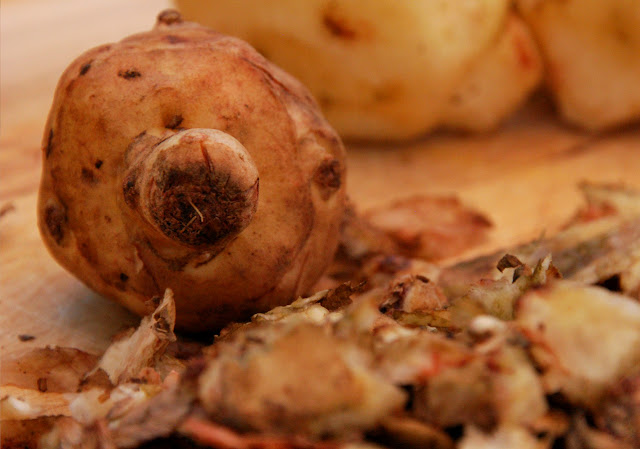 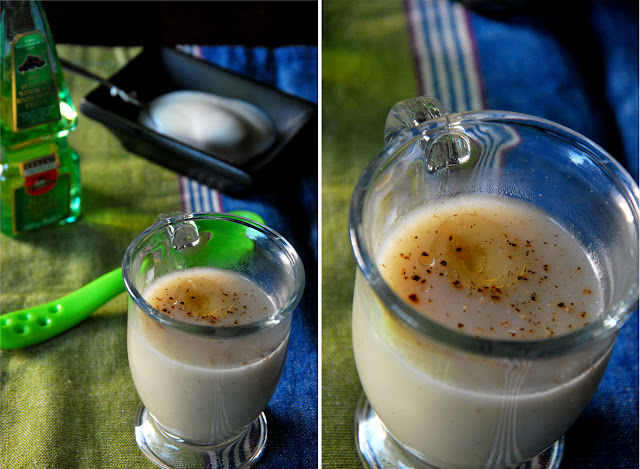 I may be spoiled in California with most vegetables being available local, organic and year around. Is it the case where you are? Does anyone else cook roots (except for beets) in summer? Would love to hear about your recipes!

Inspired from a recipe found on Elle à Table

Age: 6-8 months (be sure to have your child taste shallots with another known ingredients in case of any allergies.) Sunchoke can also be made as a simple puree (see recipe below), from 6 months on, just like artichoke. It does cause gas in some cases, so monitor your child to see if he digests it well.

Health benefits: Sunchokes are very high in fiber. They also contain vitamin C, phosphorus and potassium and are a very good source of iron.

Peel the sunchokes. They are a pain to peel, but that’s about the most challenging part of this recipe! Cut them up in pieces.

Peel and dice the shallot (don’t cry, it’s ok!) Put the diced shallot in a dutch oven with the olive oil on low to medium heat, let it “sweat” without browning.

Add the sunchokes and add enough water to cover them. Add a pinch of salt. Bring to a boil, cover, lower the temperature and simmer for about 45 mn, until the sunchokes are soft (check them with a knife like you would a boiled potato).

Put the whole thing in a blender and mix. You can let cool and refrigerate for later, or serve right away.

When serving, reheat if needed and add the yogurt, and truffle oil if desired.

Sunchoke puree (5-6 months): Peel, dice and steam the sunchokes for 15 mn, until soft. Mix with some milk to obtain desired consistency. (You can mix with some boiled potato for a milder taste).

This recipe was contributed by Michele Molinari, whose great-grandmother was from southern Reggio Emilia on the border with Northern Tuscany. She used to call it Zuppa Toscana because she said that was the way it was prepared in Tuscany; Michele has no precise details as to where it originated for sure.

For a perfect taste, serve the following day after preparing the soup. Serve hot with a swirl of extra virgin olive oil, ground pepper, and a couple slices of slightly toasted bread.