What a hard week this was, and as I finally sit down to
write these words, I do it with a deep sigh
of relief and contentment. Of
finally being back in this space, with you, and share what’s been on my mind (and at our table).

A few weeks ago, I was chatting with a mom friend, and
somehow I mentioned that Pablo loved radishes. She was slightly surprised, and
told me that even though she loved radishes, it had never occurred to her to
give them to her toddler.

The other day, at a barbecue, another mom told me she felt
absolutely certain her daughter would never try eggplant.

Recently, there was an article in the New York Times’Motherlode column where a mom vowed for one whole week to forgo processed
foods and home cook. As journalist Maryn McKenna pointed out, is home cooking
really the of parenthood?
Some time ago, I found a blog who had kindly linked back to
my blog, and found a thread of comments where some moms, while marveling at
Pablo’s menus, seemed to find them simply unachievable. A week without
pasta? Six kinds of vegetables in one meal? Unthinkable, apparently.
You see the common theme here. Eating mostly real foods, home
cooking, eating as a family on a daily basis, exposing infants and young
children to a wide variety of foods… appears to be far from mainstream.
And I’m always slightly puzzled by the surprise reaction I often get (“Pablo
really eats all this stuff? You really cook every day?”), because I was
fortunate enough to grow up in an environment and a culture where there’s
nothing extraordinary about feeding young children radishes, Brussels sprouts,
eggplant, duck or aged goat cheese, about cooking meals with real food (is
there any other kind?) and eating in courses on a daily basis. In many places
and for millions of families around the world, this is completely normal and
feeding oneself any other way would be considered very strange.

Sure, there are financial factors and the lack of time, but
mostly, I noticed the barrier is in the mind. And that’s one of my goals with
this blog, to show it can be done. Not effortlessly (what is?), but reasonably
easily. 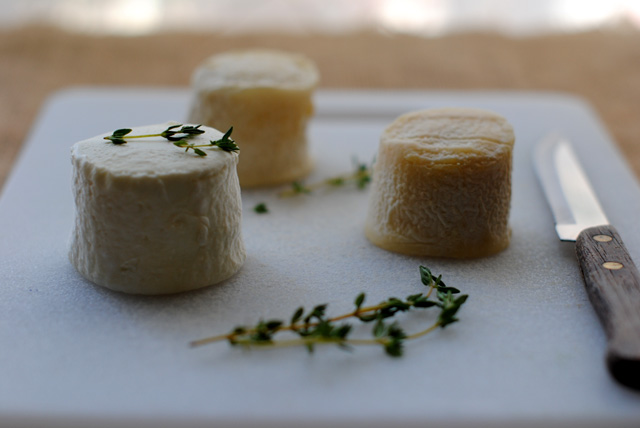 As I was watching Pablo happily macking asparagus (sans vinaigrette no less!) today at lunch, it struck me again how very normal this is to him. And scrolling through my Facebook newsfeed, it is obvious there’s a whole community,

a movement out there (Michael Pollan
being one of its most famous proponents), and more and more resources and
education, working to normalize real
food and home-cooking.

And I’ve never been much of a “movement” gal, but I am happy, and proud, to be a tiny part of this one. It seems like a tall order to change mentalities of a whole generation. What we
can do though, is normalize flavorful, real food for our children (from the
very first foods they eat), have them grow up in an environment where good,
real food, variety and enjoyable family meals are just the norm. And they will
come to expect, and seek, these things as they grow up. These foods will become the comfort foods of their childhood. 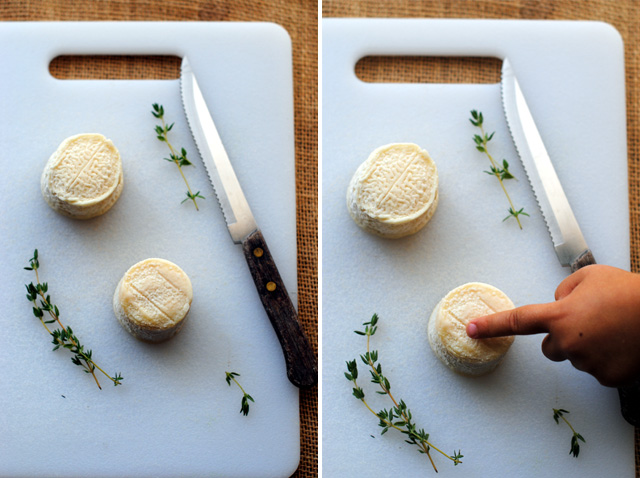 I realize I might just be preaching to the choir here, as
most of you reading this blog are probably reading it because you’re already
sold on this idea. I guess my point is that by practicing this in your home
with your family, by giving thought to mindful eating, making it a parenting
priority to give your children a lifelong love of a good meal, by embracing the
process of cooking as something that ultimately, and in many different ways,
makes our lives and that of our families better, by not giving up in the face
of societal pressures, you are part of this movement as well. Your children might just
consider any other way to nourish oneself an abnormality. 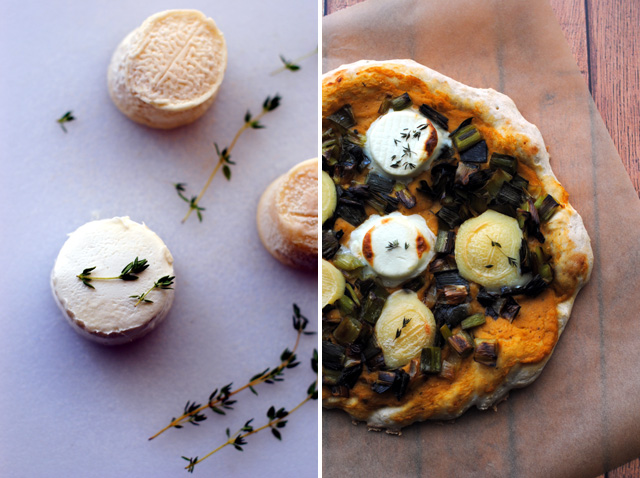 Speaking of abnormal, for this new installment of the Summer Goat Cheese series in collaboration with Vermont Creamery and the Kids &Kids Campaign, I am sharing this “pizza”, of sorts. See, I have a confession to
make: I actually do not like pizza. It does nothing for me. Call me a French
snob, but I would have to be pretty desperate to eat a Domino’s pizza or the
like. I don’t get the excitement around it, I don’t get why it is pitched to
kids as the best food ever, I don’t get why a kid’s birthday party without it
seems unthinkable to so many people. Perhaps a trip to to the birth place of pizza would change my mind, and that’s definitely on my
bucket list, but for the time being, I remain a pizza skeptic.

I suppose I could have called this a flatbread rather than a
pizza (though it’s not very flat, as I prefer pizza dough to be thick and a bit
chewy), since it doesn’t really have any of the traditional pizza ingredients.
But no matter what you call it, it has turned out to be one delectable
experiment.

It all started with the eggplant caviar I made for the
Fourth of July. Slightly sweet and tangy. A delicious dip, which my mom
couldn’t get enough of with some savory thyme crackers. 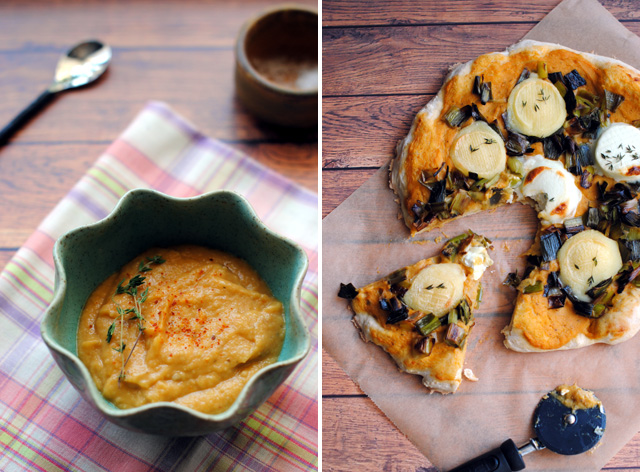 We had a lot leftover, so after spotting the fresh pizza
dough sold at Trader Joe’s, it gave me an idea. And when I imagined VermontCreamery’s beautiful goat cheese crottins
melting over the top, I was sold. I hope you will be too.

The tangy sweetness of the eggplant caviar is so nicely complemented by the burst of salty in the goat cheese and the subtle savory flavor of the leeks.

Think of it. As you and your family might enjoy a bite of this eggplant, leek, artisan goat cheese pizza, in a small way, you will help create a new normal for generations to come. Talk about two birds with one stone 😉

For the eggplant caviar (yields about 2 cups)


Age for babies: 6-8 months, this is a great baby puree which you can freeze too.

Bring a large pot of water to a boil.

When the water boils, place the 3 tomatoes in it for 2 minutes.

Run the tomatoes under cold water to stop the cooking, and peel them. Cut them in half, and gently squeeze the seeds out. Then dice them and set aside.

In a nonstick pan or Dutch oven, melt the coconut oil and add the eggplant and apple. Sauté over medium heat for about 3 minutes.

Then add the thyme, tomatoes and apple juice, sprinkle with salt and piment d’Espelette and cook until all soft and mushy, about 25 minutes.

Process in a food processor or blender until very smooth.

Can be kept in the fridge with a layer of olive oil on top for up to a week.


1 pizza dough (I used Trader Joe’s plain pizza dough, but will make this one, or this one next time)
1 cup of the eggplant caviar
3 goat crottins, either the aged Bijou, or fresh crottin (or mix and match!)
A few sprigs of thyme (stems removed)
3 leeks
2 tbsp olive oil or coconut oil

Prepare the pizza dough depending on the one you’re using, roll it flat and as thin or thick as you like it.

Wash the leeks by making a lengthwise incision and running water through. Then slice in 1/2 inch pieces.

Melt the oil in a frying pan, and gently cook the leeks over medium low, stirring every so often, until they are soft, about 10 minutes.

Spread the eggplant caviar all over the pizza dough. Add the leeks on top, the crottin halves and sprinkle with thyme leaves.

Bake for about 10-12 minutes, until dough is cooked and cheese is beginning to melt and color.